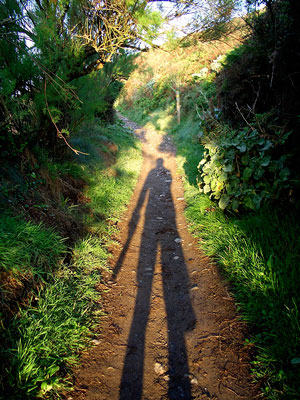 Leaving school with the minimum qualifications required for Art
College entry, he applied this approach to graduation attaining
a basic 'Pass' grade Diploma in Art and Design (BA 3rd.).

From 1971 - 2004 he accepted professional commissions in
London, Paris, Milan and New York, to collaborate in the
origination, production, and visual presentation of ideas
exhibited across 6 continents.
Work produced during this period included a film installation
for Friends of the Earth, which received Gold awards at
Cannes and the BBC, Silver at D&AD, and display in the V&A.

To accommodate the making of large paintings, he opened his
first London studio in a former WWI Veterinary Equine Hospital in
1993; and in 2002 moved to his present South London studio
in SW8.

From 45 formative years of travel, revised opinions, and periodic
volte-faces, he has collected together here a representative selection
of art-making.

The frequently unforeseen outcomes of his current work are arrived at from
a personally devised method for making images, and are usually presented
in the form of drawings, single edition prints, books and paintings.
His preferred techniques have often involved the physical recovery of found
materials and their renascence as a drawing or painting medium.

Recent works have explored the changes over time to his visual reinterpretation
of personal memories; especially those he has always considered as true and
significant touchstones of his autobiographic history. The emergence of these
pictures have prompted him to consider if newly retrieved memories could be
shaped by the cerebral filter we understand as experience; and to question if
their emergence has less to do with their being dormant or forgotten, and more
to do with the influence of imagination.
At present he takes the view that it is only when the images he has made reach
an unarguable state of personal recognition – can he believe in them as art.

Many examples are available for viewing here in Galleries 1-7. Please click
on a Gallery and any image displayed for its enlargement, title, details and
dimension. Clicking on NEXT or PREVIOUS will take you through a selection
from each series.